Nick Jonas has been an idol for kids all over the world since he was young. But now that he’s married, people are starting to wonder if it’s time for him to have a kid of his own.

His wife, Priyanka Chopra has made it clear that she’s ready to start a family now. However, is Jonas on board with that? They’ve still been married less than a year. Is it too soon for this pop star to procreate?
Chopra has been very open about her desire to have a family. For her recent Vogue India cover story, she told the publication that having a baby was on her “to-do list.” Although she didn’t give a timeline, putting it on a to-do list sounds like Chopra wants this to happen very soon.
In an interview with both Chopra and her husband shortly after they were hitched, she spoke for both of them when she told People she was eager to have a baby. “We definitely want kids, and when the time is right, it will happen,” she said. 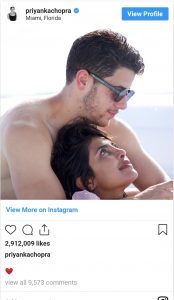 Chopra doesn’t just want a baby because her biological clock is ticking. This is something she’s thought a lot about. That was evident during her interview with InStyle, when she said, “I want my existence to have meant something. I want my kids to turn around and be like, ‘Yeah, that was my mom.’”