Ajay Devgan’s Bholaa has been into news since a long time now. The actor recently provided an update on his new movie, Bholaa. Yes, but it’s regarding to the character portrayed by Tabu. The character of Tabu from the movie receives a new first-look poster thanks to Ajay Devgn. She is a police officer in the drama. Tabu is equipped with a rifle and her characteristic aviators to take on any “shaitaan.” Ajay Devgn shared the movie and remarked, “One police officer and 100 criminals”. Ajay Devgn used the hashtags “#TabuInBholaa” and “#Bholaain3D” for his films. On social media, the most recent iteration has taken off like flames. Emojis like fire and a red heart have been used a lot in the comments area by fans. Huma Qureshi, an actress, also felt compelled to leave a remark on the page, and embraced by giving fire emojis to the actress’s look. Well Tabu looks really fierce and amazing. That intense factor is something which is the centre of attraction for the viewers. Well peeps have given a very positive feedback to Tabu’s character but some or the other way,the character seems to be compared with Drishyam which starred Tabu in the role of a police. Let’s see whether the character portrayal gets better and whether the movie supposedly does as well as the other cop starred movies.
Ajay Devgn and Tabu recently appeared together in Drishyam 2, which has received a lot of positive feedback from both fans and critics. The movie is the follow-up to Drishyam, which told the tale of Vijay Salgaonkar, played by Ajay Devgn, and how he managed to save his family. The movie was a Hindi adaptation of the Mohanlal-starring Malayalam original of the same name. Tabu was the cop whose son was murdered by Salgaonkar’s family and she steadily takes her stand as she already seems to know the truth. Duo’s collaboration was highly praised by the audience and lets see whether they supposedly get the same or the different reaction. Bholaa is helmed and produced by Ajay Devgan and is slated for release on big screen on March 30. It is the official hindi remake of Tamil hit Kaithi starring Karthi in the lead role. 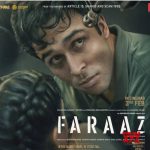