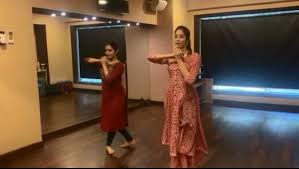 Janhvi Kapoor, who has managed to impress us with her dancing skills on several occasions, managed to do it again. Janhvi shared a video of herself dancing to the song ‘Salaam’ from Aishwarya Rai Bachchan’s 2006 film ‘Umrao Jaan’.

In the video, Janhvi can be seen dressed in a pink kurti and palazzos, as she dances gracefully with her instructor. Sharing the video, she wrote, “Missing the classroom. But anywhere and everywhere can be a classroom no?”

This is not the first time that Janhvi trended for her dance video. A few weeks ago, Janhvi shared a video of herself dancing to the evergreen song ‘Piya Tose Naina Laage Re’ from Dev Anand and Waheeda Rehman’s 1965 film ‘Guide’. “When you lose balance, so you have to do an improv over-dramatic end.” Janhvi wrote.