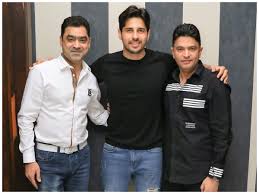 Sidharth Malhotra made his big Bollywood debut with ‘Student of the Year’ in 2012 and ever since then there was no looking back for him. He has been winning over the audience by giving back to back amazing performances on the silver screen. Now, the actor took to his Instagram handle to announce his next film.

Sidharth recently posted a picture in his Instagram handle with the producer of ‘Kabir Singh’  Murad Khetani and managing director of T-series  Bhushan Kumar. The post was captioned as, “Delighted to announce my next, an action thriller, in collaboration with @bhushankumar starring @sidmalhotra! The film will go on floors in May and is set to release on 20th November 2020. @vk @tseriesfilms @cine1studios @tseries.official”.

According to the reports, Sidharth will be seen playing a double role in the film. He will play the role of a confident businessman as well as a rowdy guy, who will be a thief. Sources further stated, “After several rounds of discussions and recce, they zeroed in on Delhi. The team will shoot at real locations in the Capital city. The chase sequences will be canned on busy streets.”

Meanwhile, on the professional front, Sidharth is portraying the role of Param Vir Chakra awardee and army captain Vikram Batra in Vishnuvardhan’s army drama ‘Shershaah’. The film which also stars Kiara Advani is slated to release on 3rd July this year.

The film will hit the silver screens on 20th November 2020.