While fans and well wishers were speculating fun segment in the new season of Koffee With Karan, it now seems like the Koffee With Karan’s new and most anticipated season has not only funny revealations but also has certain steamy hot conversation. In the recent episode where we saw the duo and lead of the much anticipated upcoming Pan India film, Liger. The latest episode was embraced by the presence of Ananya Panday and Vijay Deverokonda. Fans and viewers have showed love to both of them as the duo rocked the coffee couch. The most amazing segment of this new season was the ‘Bingo’ round which had in list some of the most hot and sensual options and the actors need to tick their respective done list. Coming on to Ananya’s Bingo, the actress was seen highlighting many naughty things which she has done. Be it covering her hickey, got rejected for a role, checked partner’s phone, lied about her relationship status, ignored co stars glances, texted someone late etc. While speaking of options when Ananya spilled beans and shared details, the actress said that Tara Sutaria was the co-star whose glances she ignore and while spilling beans on the hickey conversation the actress said she got a hickey on her face. Taking over Karan Johar also asked about the products she used and in the meanwhile he also spilled beans about having a problem with hickey once. Ananya even said she could help but the actress actually made fun after saying that she did not know where the hickey actually is. The actress also was a bit concious while speaking about her romantic encounters as she stated that her parents will watch the show to which Karan replied “what do you think, your parents feel they have a vestal virgin at their home?”

Speaking of Vijay’s Bingo, the actor actually took over the round. Vijay ticked options like ignored co star’s advances, applied makeup to cover hickey, did it at public places, stalked an ex on social media, got drunk on the sets etc. While spilling beans on each of the options, the most amazing thing that Vijay revealed was he did it public places. Karan Johar asked to Vijay ” no other public places like hotel or loos? to which Vijay replied “Cars” and exclaimed having desperate times. He also mentioned about his early days when he used to get drunk and a time when shooting was called off as he was merely drunk. Seems like both the stars have spilled a lot more sensual gossips and the episode js definately going to be remembered in the history of Koffee With Karan. Neeru Bajwa’s next Punjabi venture is all set to be released on ZEE5:-
Next Article 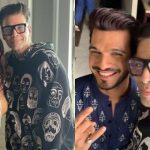