This film is produced by Teg Productions and GRS Chhina (Calgary, Canada) Finally, the most awaited movie of the year ‘Aate Di Chidi’ is about to release. As only one day is left to its release, the excitement among the audience is exceeding all limits. ‘Aate Di Chidi’ is a film which will surely make everyone remember their childhood and happy-go-lucky days, along with the warmth and affection of their mothers.

The movie has been in the limelight from its announcement because of the fresh pair of Neeru Bajwa opposite Amrit Maan. Alongside these two talented artists, the film also has stellar actors like veteran Punjabi actor Sardar Sohi, Gurpreet Ghuggi, BN Sharma, Karamjit Anmol, Nirmal Rishi, Harby Sangha, Nisha Bano, Preeto Sawhney, Dilawar Sidhu, Prakash Jadu, and Anmol Verma. Aate Di Chidi is a story about Punjab’s issues which will be gently showcased in a humorous way. It promises to be a giggle-fest for the audiences. The movie is helmed by Harry Bhatti and Raju Verma has written the story. The movie has been shot in Punjab and Canada. The entire project is produced by Teg Productions’ Charanjit Singh Walia and Tegbir Singh Walia. GRS Chhina (Calgary, Canada) has co-produced this film.

At this moment, leading lady of the film, Neeru Bajwa said, “Aate Di Chidi is a film close to my heart because like its story and backdrop I am also born and brought up in Canada. Since childhood, I was also unaware of so many things integral to our culture which I got to know during the shoot. This movie has made me value our culture more. I have enjoyed each and every step of its making. I hope people will also enjoy while watching ‘Aate Di Chidi’.”

Actor and Singer Amrit Maan said, “I have performed in many songs and have done a movie too, but taking the whole burden on your shoulders is very different. I am happy, and at the same time very nervous. But I think I am blessed that I got a chance to start my journey with this kind of project. I have done my best and hope that audiences will accept my work. I hope I have justified the role and people’s expectations. It doesn’t matter how many movies I will do in the future, but this film has been a learning experience that I will cherish my whole life.”

The director of the movie Harry Bhatti said: “Aate Di Chidi is one of the best attempt of mine to make people aware of the richness of Punjab’s culture and heritage. I must say, each and every member of our cast and crew worked very hard. The hard work of everyone will be seen prominently in the film. Working with such talented people has been a pure learning experience. I am quite sure that audience will feel the connection to every emotion and when they leave the theatre they will surely be proud of their culture.”

“’Aate Di Chidi’ is a project on which we have not only invested financially but emotionally as well. We have paid keen attention to every bit of the film. From selecting the perfect script to the most diligent leads, we have made sure that every single part is nothing short of ‘the best’. We don’t want any stone left unturned from our side. We are overwhelmed with the response people have given to the trailer and song of the film till now. We are excited about the release now and hope people will appreciate our efforts.” Charanjit Singh Walia and Tegbir Singh Walia of Teg productions quoted. 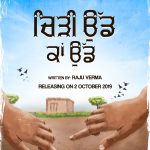