The most anticipated movie of this young macho man, is onboard and the trailer for the same just got released. Well it’s just so much to handle, that within just few minutes the trailer got immense love and appreciation from the viewers. This isn’t something fascinating as because this young man has got huge and a large amount of fans. Well we are speaking of none other than Kartik Aryan and his much awaited movie Shehzada. The first look from the movie was released yesterday alongwith this huge meticulous news of the trailer release today and finally the movie’s trailer has been made public. Kartik Aaryan appears in the Shehzada teaser in a never-before-seen action avatar. We haven’t seen Kartik perform hebben and strong dialogue-bazi before. Fans of Kartik Aaryan are undoubtedly anticipating the big-screen adaptation of his transformation from a chocolate boy to a boisterous Hindi cinema icon. Kartik seems to do all sort of action, comedy, and humour in the movie. He looks meticulously amazing in the movie. His dancing moves are also something which is attracting viewer’s attention. Something which is worth appreciating is Kartik’s and Kriti’s chemistry together. They both look terrific together and the aura they have created together is something worth praising. Paresh Rawal is portrayed as Kartik’s father in the movie. Known for his much amazing sense of humour and comic lines, Paresh too seems to be an interesting character. Kriti Sanon in the movie is described as smart, educated and well established personality, but her perso is not yet revealed. Well this action comedy genre seems to have with it a lot of elements from the 90’s as stated by  the lead actress Kriti herself. Be it romance, action, thrill, comedy and mostly the humour, the actress pointed that we are going to witness it all through this movie. The movie also has the presence of Ronit Roy, Rajpal Yadav, Manisha Koirala, Ankur Rathee etc.

Well Kartik Aryan seems to have something huge on plate. Post the release of Bhul Bhulaiyaa 2 the actor’s demand has been on sky, he has been offered several films and various roles. He was seen in Dhamaka as an amazing news reporter and yes it should not be forget that he pulled that character amazingly. Earlier in movies like Pati Patni Aur Woh, Pyaar Ka Punchnama and Pyaar Ka Punchnama 2, he played this amazing character of a friend and he even pulled that well. Now in this movie he is playing a role of lawyer. Let’s see if it brings us something new from his side. 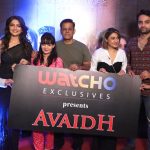