The duo of Ammy Virk and Tania which is loved by people is all set to come on board for another movie named ‘Bajre da Sitta’. As the lead pair, ‘Bajre Da Sitta’ is Ammy Virk and Tania’s third movie together, after ‘Sufna’ and ‘Sufna 2’. They also worked together in ‘Qismat’, which market Tania’s debut in Pollywood, but wasn’t a leading role. The two will also be seen working opposite one another in ‘Qismat 2’. Alongside Ammy Virk and Tania, the movie also includes Noor Kaur Chahal and Guggu Gill in the main roles.

Just a few days back, both the actors shared their pictures from the set of the Movie ‘Sufna 2’ which is a sequel to their much-applauded movie ‘Sufna’. 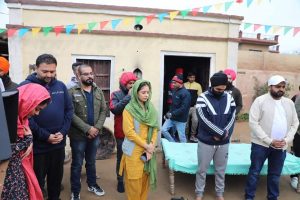 Further, Amy Virk is also subsidizing the movie along with Shri Narotamji Films and Tips. The two were also seen together in the movie ‘Qismat’ but however, they were not working opposite each other.

The two actors shared the news of this movie on their Instagram handles with the same post. While the caption said that the shooting for the movie has already been started. With a fortunate movie already in their fist, let’s see how the upcoming movies of the duo would entertain the audience and their fans.