After much anticipation, and wait this movie’s trailer has been finally revealed. Definately it’s a treat as the movie was very much awaited and now that the release date is approaching, the makers decided to give this new year treat to fans and viewers. Well yes we are talking about Shahrukh’s Pathaan. The Pathaan trailer featuring Shah Rukh Khan, Deepika Padukone, and John Abraham is officially available now. Dimple Kapadia’s voiceover narration in the trailer’s opening scene describes a private terrorist organization’s goal against India, which is being led by John Abraham. In order to defeat him, Pathaan must put an end to his “vanvaas” (exile). Here, Shah Rukh appears as Pathaan, speaking some challenging speech. Well be it in the aspect of style, smoothness, clarity and that aura of screen presence, Shahrukh’s Pathaan has definately been straight dived into the audience’s heart.
Deepika Padukone and John Abraham look really amazing. While Deepika is pairing as Shahrukh’s partner in the movie, John is playing the opposition. Shahrukh is having various action sequence and the face off between Shahrukh and John looks really amazing. Deepika’s aura is an cherry on the cake. The movie’s action scenes feature VFX exactly like every other action scene in an action movie nowadays. The actors Ram Charan and Vijay also shared the trailer in Tamil and Telugu, respectively. Vijay commented, “Wishing @iamsrk sir and the team the best for #Pathaan,” and Ram Charan, “Wishing the entire team of #Pathaan the best! Looking forward to seeing you in action scenes like never before, @iamsrk Sir!
Well after this very much intriguing trailer fans are extremely delighted to see the movie on big screens. The movie is helmed by Sidharth Anand who seems to have done full justice with the fans expectations. Well the trailer is just the glimpse and the final output is yet awaited, till then we are just swinging in with this amazingly created trailer. 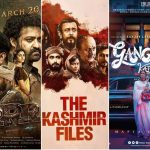